Hi Rob, can you introduce yourself and tell us how you got involved in the world of toys?

Hey, thanks for having me guys! I’m Rob Ames Co-Founder & Creative Director at design consultancy, Triclops Studio and part-time shop keeper down at, Toy Shack – our newly open retail space in Walthamstow, London.

I guess I’ve been into toys for as long as I can remember… all those “ what’s your earliest memories ? “ are pretty much linked to toys, whether playing with or destroying them ! Many years later, via Uni I landed a dream job at Hasbro designing ‘ Boys Toys ‘ – Action Man, A.T.O.M, G.I. Joe.

You’re one half of the famed Triclops design studio. What kind of cool stuff do you guys cook up?

Yeah, we’re very lucky to work with the world’s leading Toy, Games & Network companies. After deciding to leave Hasbro ( with my business partner, Luc Hudson ) to pursue a life of self-employment, we never imagined that flash forward 7 years, we’d be working with the likes of LEGO, Disney, Cbeebies, Mattel, Bandai, Aardman etc.

We mainly focus on front-end concept design, coming on board at the beginning of a project or the birth of a new brand. We specialise in Action Figure development but, over the years the studio has evolved to encompass everything from Girls Toys to App Development, Character Creation to Story World Building for TV & Movies.

If we get any down-time ( which is rare these days ! ) we also have our sticky fingers in the underground toy scene where we design and collaborate with other like-minded peeps to fashion less mainstream toys from either resin ( which we hand cast ourselves ) or vinyl.

You’ve also recently opened The Toy Shack in Walthamstow. What inspired you to venture into a retail space? How are you finding this so far?

Toy Shack is something we’ve wanted to do for a while but, just never found the right space to try it. When we travel overseas with work we love taking time out to discover all those under the radar toy shops that are usually tucked away off the beaten track. That discovery or ‘ hunt ‘ is something we wanted to encapsulate with Toy Shack. There’s not many shops like ours in the UK, if not Europe… there’s some pretty cool spots in the US & Japan but, I think our shop has a typical UK feel to it – aided by the location, a classic British indoor market!

We also wanted to get kids (and big kids ) into collecting again and who knows, maybe inspire the next generation of toy designers. I guess that’s why the shop is rammed with weird and gnarly toys from the 80s, 90s & 00s, stuff which we loved and inspired us. The response has been amazing, better than we ever expected… we have such a great cross section of peeps visiting the Shack – young kids, big kids, the cool kids, collectors, underground toy heads; the lot ! We appreciate all the support and the plans for the future are bright… watch this space!!

Do you have a particular favourite line or era when it comes to toys?

Sooooo hard to pick one line… I’m a mid-80s man / boy (ha !) myself but, if I had to pick one line that for me blew me away back then (and still does), it’s probably Garbage Pail Kids. Not necessary a toy line (however there was a great mini figure line called ‘ Cheap Toys ‘) but, the cards and the art of John Pound just catapulted me into collecting and getting into drawing characters.

Streetwear and toys have had a long joint history. What’s your take on the current state of affairs?

It’s a big old melting pot these days but, yeah the streetwear & toy thing has kinda gone hand-in-hand for a long time now, especially out in Japan. I think it’s a circle of inspiration – toys inspire tee designs etc and more recently underground toys are vibing off what certain streetwear brands are creating. The early days of A Bathing Ape (and their toy crossover projects) was probably the catalyst for the likes of Maharishi, Supreme, Gimme Five, Stussy, Addict, Silas etc creating these amazing Art Toys with artists / companies such as KAWS, Futura, Mr. Jago, Kubrick, James Jarvis & Michael Lau. These toys still stand the test of time and command silly prices on Ebay but, I think more recently there’s been a shift towards more affordable crossover projects spearheaded by US brands like Mishka, The Hundreds & Johnny Cupcakes. These guys are doing stuff which is much more ‘ homage ‘ related which personally I dig. Mishka have been on a toy tip for as long as I can remember – their all over M.U.S.C.L.E men hoodie from years back is still etched in my mind and was probably my gateway into the brand.  Today they have a side project / brand called, Ghost Cave which is still a toy tipped outfit producing tight, crossover toys, tees & caps etc.

The Hundreds’ Garfield capsule collection from a few years back was a great collaborative project too. The threads were great but, for me the star of the collection was a large skateboarding Garfield figure… it’s actually one of my favourite pieces.

And if you like 80s staple Madballs, keep an eye on up and coming brand, Scumbags &   Superstars who are working on a line of foam, bootleg Madball-esque toys. These guys are also big toy heads and a lot of their clothing designs are inspired by horror-based toys from the 80’s & 90’s. I’m sure once the toys drop they’ll be a dope line of tees, caps etc. to accompany the launch. 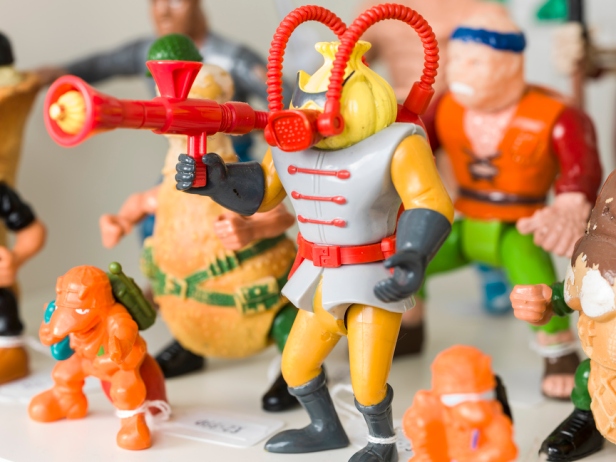 Finally, do you have any advice for budding toy designers out there? Or anyone who wants to pursue a creative role?

Idea is king in the toy industry so whilst busting out the pencils and mastering those sketching skills, also be thinking of original ideas, features, hooks & looks! It’s a much more accessible job these days so yeah, if you can come to the party with fresh, forward thinking ideas you’ll make good, fast. We see a lot of portfolios and even though the work is beautifully presented the nub of the idea is usually pretty weak or it’s just a slight remix of an existing product currently on shelf. The best advice I was given was from an OG Mattel designer who said “ Illustrators are ten a penny these days so you have to be the guy who comes up with the idea(s) to stand out from the creative crowd. “ Also, always carry a little sketchbook & pen on you… that way when you spot something inspiring you can quickly get a doodle down for later exploration. I know taking a photo is easy today (and sharing it) but, nothing beats pen & paper to keep on improving those drawing skills!